CORRECTIONAL INSTITUTION FOR WOMEN (CIW):  In a report dated January 22, 1959, submitted to a committee created by Administrative Order No. 287 by the President of the Philippines, it was noted that  “before a separate building was constructed especially for women prisoners, all female convicts were confined at the Old Bilibid Prison on Azcarraga St., Manila.  The male prisoners were confined in dormitories near the women’s quarters.  Because of these conditions, the vocational activities of the women prisoners were limited to embroidery.  When they became ill, the women were confined in a separate building that served as a hospital with nurses and prison physicians.  When women prisoners needed surgery, they were operated on at the Bilibid Prison. After the operation, they were transferred to the infirmary for convalescences.

Prison authorities were aware of the conditions that the women prisoners had to endure. Consequently, the transfer of the women to a separate site became inevitable.  After a series of negotiations started by Prison Director Ramon Victorio, the Philippine Legislature passed Republic Act No. 3579 in November 1929. It authorized the transfer of all women inmates to a building in Welfareville at Mandaluyong, Rizal, and appropriated P60,000 for the move.

On February 14, 1931, the women prisoners were transferred from the Old Bilibid Prison to the building especially constructed for them.  Its old name, “Women’s Prison, was changed to “Correctional Institution for Women.” This was in keeping with emerging trends in penology, which emphasized correction rather than punishment. Convicts were brought back into the social mainstream adjusted and rehabilitated with a better outlook in life. 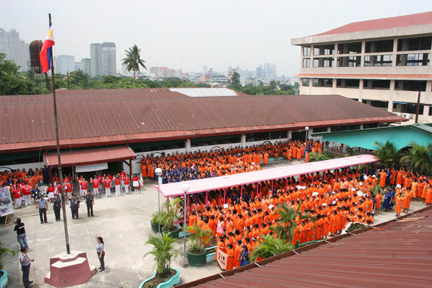 CIW, according to a Senate report, occupied 18 hectares. The original structure was a one-story building that housed the office, the brigades, mess hall, kitchen, chapel, infirmary, bathrooms, and employees, restrooms.  The building has a central courtyard with trees and flowering plants. The prisoner’s vocational activities were expanded to include poultry and piggery as well as the cultivation of crops, flowers, and fruits. Living quarters for the institution’s employees were later constructed in the compound. During the Japanese occupation, the CIW, despite a drastic reduction in the number of its employees, continued with its work. A number of female military prisoners were also confined in the institution.  They were later freed by the U.S. Army.

After the war, the CIW resumed its normal operations.  Weekly catechism classes were introduced. A dental clinic was built. Local telephones were installed in the guard’s quarters. The Bureau of Public Works made major repairs on the main building and a workshop and infirmary were constructed for the inmate’s use.  The infirmary during that time could accommodate around 16 patients.

In 2000, a new four-story building was constructed by the Department of Public Works within the grounds of CIW.  It eased the growing congestion in the facility.  The CIW, with a capacity for only 200 inmates, had to accommodate 1,000 inmates.