IWAHIG PENAL COLONY: This facility was established during the American occupation.  It was, however, during the Spanish regime that Puerto Princesa was designated as a place where offenders sentenced to banishment were exiled.  A specific area of Puerto Princesa was selected as the site for a correctional facility.  The American military carved out a prison facility in the rain forest of Puerto Princesa. The institution had for its first Superintendent Lt. George Wolfe, a member of the U.S. expeditionary force, who later became the first prison director.

Governor Luke Wright authorized the establishment of a penal colony in the province of Palawan on November 16, 1904.  This penal settlement, which originally comprised an area of 22 acres, originally served as a depository for prisoners who could not be accommodated at the Bilibid Prison in Manila.  In 1906, however, the Department of Commerce and Police (which later became the Department of Public Instruction) moved to turn the institution into the center of a penal colony supervised in accordance with trends at the time. Through the department’s efforts, the Philippine Commission of the United States government passed Act No. 1723 in 1907 classifying the settlement as a penal institution.

The settlement was at first beset by attempted escapes.  But under the supervision of Col. John R. White of the Philippine Constabulary, who would become superintendent of Iwahig in 1906, the colony became a successful settlement.  A merit system was devised for the prisoners and vocational activities were offered.  These included farming, fishing, forestry, carpentry, and hospital paramedical work. Prisoners could choose the vocational activities they wanted. 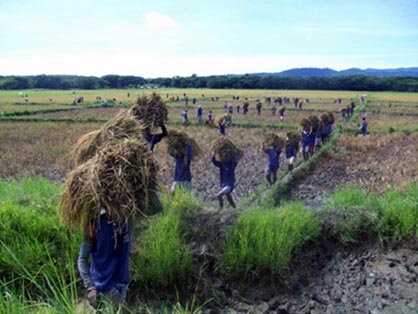 In 1955, Administrative Order No.  20 was promulgated by the President and implemented by the Secretary of Justice and the Secretary of Agriculture and Natural Resources.  This order allowed the distribution of colony lands for cultivation by deserving colonists. The order also contained a list of qualifications for colonists who wished to apply for a lot to cultivate, the conditions for the settler’s stay in his land, loan requirements, and marketing of the settlers’ produce. Lots granted did not exceed six hectares.

On August 16, 1959, a committee was created by President Carlos P. Garcia to study the state of national prisons. Accordingly, prisoners in Iwahig were divided into two groups:  the settlers and colonists.  The settlers are those engaged in farming for their own benefit; they are the ones whose applications for land to cultivate have been approved. The government furnishes the land and initial requirements for tools, dwellings, and beast of burden.  They are required to reimburse expenditures incurred for their maintenance and that of their families out of the products of their farms. Upon their release from the colony, they receive whatever amount of money they have credited in their favor, after deducting the obligations they have.

Iwahig is subdivided into four zones or districts:  Central sub-colony with an area of 14,700 hectares; Sta. Lucia with 9,685 hectares; Montible with 8,000 hectares and Inagawan with 13,000 hectares.

Recent developments and presidential proclamations have dramatically reduced the size of the prison reservation of Iwahig.